7 of the most influential female Instagrammers in Vancouver

This website is about celebrating, and connecting, professional women. We give you the option of meeting friends, finding mentors, and even buying and selling clothing.

We wanted to take this opportunity to celebrate a few successful women in our community, who have become influential not only on Instagram, but in Vancouver.

So here’s to you!

7 of our favourite local influential females (and Instagrammers), in no particular order:

Rebecca is better known as her alter-ego, Miss604. She has been blogging about Vancouver since 2004, and her blog happens to be the most comprehensive resource for events, happenings, and even the history of Metro Vancouver. She wins #1 Blog in Vancouver from the Georgia Straight’s Best of Vancouver year after year. When not behind her laptop, she can usually be found cheering on the Vancouver Whitecaps, alongside her husband with the South Siders, at BC Place.

The last time I wrote a 1500 word anything was in university. @jillian.harris’ blog post, “How This Alberta Meatatarian Became So Vegan-ish,” reminded me how powerful vulnerability can be. She’s inspired me to share my plantbased journey as further proof that no one is perfect and it’s okay to make mistakes. Link in profile.

Erin calls herself a food blogger, plant and animal lover. Well, we think she is much more than that. She is basically our go-to gal for food in this town, especially when it comes to plant-based eating. If you haven’t heard of her “It’s to Die For Banana Bread,” you must have been living under a rock the past few years. She’s also turned into a bit of an activist for adopting rescue dogs. Her adorable dog, Effie, who appears in most of her photos, was a rescue dog from Mexico, and you’ll see her bring it up often on Instagram.

My hair, my makeup! You are a beauty god @jagdhahan ❤️ Thank you ❤️

“Professional People Photographer,” as stated on her bio, Karolina Turek is the photographer of our dreams. She does everything from corporate shoots, to editorial, to weddings. She shoots a lot of A-listers, too. Get a load of the “familiar faces” on her website. She makes people look beautiful, that’s for sure. #takemyphotoplease

Ahh, so honoured to be on @montecristo_mag today about my @StyleNinetoFive journey in an article called Plan A (because I had no Plan B) by @sarowitz. So well written, Sara. THANK YOU! Go read it. Link in profile.

Christie Lohr is a smart gal. She experienced first-hand the difficulties of recruiting for fashion, and realized there was a demand for this niche problem. That’s why she founded Style Nine to Five, a fashion job website that connects fashion industry employers and job seekers with the largest listing of fashion jobs in Canada. You’ll often see her appearing as the fashion expert on Urban Rush, City TV’s Breakfast Television, or CTV Morning Live. If that wasn’t enough, she also has Style Nine to Five NYC, and Style Nine to Five Bev, a beverage industry job board site for Vancouver and Toronto. Her Instagram feed is basically just a fashion editorial, which kind of makes you want to hate her, but really, we know you just want to be her.

Even after 10 yrs with @etcanada, I turn into a giddy school girl at the sight of the mother ship. ???? da da da da da da! #entertainmenttonight #studio #tvhost #me #love #la #dream #travel #instagood

Erin Cebula has the dreamiest job where she gets to interview celebrities on TV. She’s the the Entertainment Producer and Host for ET Canada, and is just the loveliest on-screen personality. Her Instagram feed will make you jealous–sure, it has some behind the scenes of her fabulous job–but it also has a lot of real-life moments, and that’s what makes her so gosh darn likeable. She’s also a spokesperson for BC Children’s Hospital DREAM Lottery, which makes us love her even more. Check out this short little video to know her a little bit better.

The Real Reel // Social media is often a highlight reel because it’s easier and more fun to share the good stuff. But today, I’m sharing the real reel. This was the best year of my life, but it was born out of one of the hardest moments of my life. This is f*cking scary for me to share, but I’m hoping that it will help someone else who may be going through their own struggle. I’m sharing the BIG changes I made and the work it took to get to a place where I can truly say I’m the happiest I’ve ever been. Video ????????YouTube.com/SunnyLenarduzzi. xo #BestYearEver Special shout out to @daniellelaporte and @donmiguelruiz for creating magic with their literary + life changing genius. #CremeDeLaCreme ???? by: @rstushnoff Styling by: @vancityvogue

Sunny has made a huge name for herself in the social media world. She is a broadcaster, brand strategist, and a social media media expert, in particular, with YouTube. She firmly believes nothing converts better than video for your business. With over 2 million views on YouTube in one year, we believe her. Her Instagram feed is part business, part pleasure–some social media and video tips, mixed in with business and personal travel, and lots of personal time with friends. It doesn’t hurt that she is a babe, and all of her friends are, too.

Her personal profile might not always give it away, but the voice behind Tight Club Athletics is none other than Tight Club President and Founder, Keighty Gallagher. With workout classes named “Booty Luv” and “Morning Glory,” Tight Club ain’t your average fitness club. Keighty’s reason for starting Tight Club was to change the way people feel about fitness. As someone who claims to “hate running, but loves beer,” she sure has created a cult-like following for her unique workout regimes, and she just seems to be getting more and more popular in this town. Well, we couldn’t be happier for a new and funky way to get fit. The future is tight. 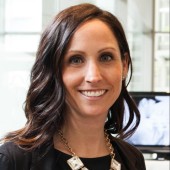 Janis is a Content Marketing Manager by day, and the Social Media Manager for Lunch with the Ladies by night.

Inspiration Round Up: Fall Tablescapes

Sticking to Your New Years Resolutions